After the latest update to Mk2, wow, now it works on T-Mobile's 4G and LTE! Maybe earlier versions work on AWS too, but I did not test and at least MDK cannot. Before this, my Verizon Note 2 was the best global phone and I have used it on the 3G/4G/LTE networks of Verizon, Sprint, AT&T,  China (Unicom) and Japan, but only 2G (EDGE) on T-Mobile. 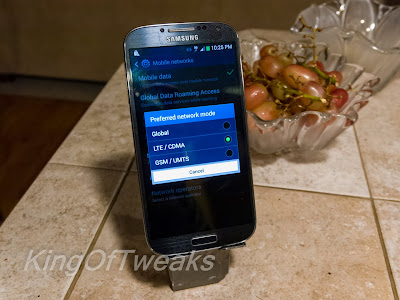 To use a T-Mobile SIM card, you don't need root S4 or unlock it. Verizon LTE phones are never locked in the first place due to an agreement between Verizon and US government. All you need is to add an APN of "fast.t-mobile.com" and switch it to GSM/UMTS for H+ or LTE/CDMA for LTE. For AT&T, Unicom, and  other GSM carriers, just add the corresponding APN.

It is still better to root it, because, as always, that SamsungSetupWizard is too annoying. And, there is no way I know of to use MK2 as a hotspot. I used "Saferoot", but the script does not work and I did it manually according to the script. To enable WiFi hotspot and USB/BT tether, I used the instructions found here (the alternative method - manually copying and moving the hacked framework-res.apk).

PS: even if you use a native T-Mobile phone, you still need to add the APN manually. The built-in one has administrative authority to enforce all kinds of stupid restrictions such as shutting down hotspot.

[update 12/25/13] Saw a good deal on craigslist, so bought a Verizon S4. Roaming automatically between EVDO and T-Mobile LTE, very cool! Very good battery life, although battery is smaller than Note 2's. Built-in Gmail2 sucks - using CPU constantly, so had to replace it with 4.1.2 like I did with Note 2 (remove /system/app/Gmail2.apk, then install Gmail_4.1.2 apk). One hand operation is much easier than Note 2. Feels faster than Note 2.

Confirmed: the latest 4.3 update enables AWS on Note 2 too!