Among current 8" Windows 8.1 tablets, I picked up the Miix 2 because it is the only one that can be charged while using USB devices. The Dell Venue Pro 8 needs some nasty hacks and it is tricky and hassle to enable charging, each and every time you connect a USB device. With Miix, you simply plug the USB charger into any USB hub (one of its USB ports, not the DC-in jack), then connect the hub to Miix. That's it, no any trick and you can connect all your devices to the hub. I actually chain 3 hubs to use my external hard drives (two), SD card reader, USB-VGA adapter, audio adapter with MIC, Ethernet adapter, BluRay drive, keyboard, mouse and etc. See this video: 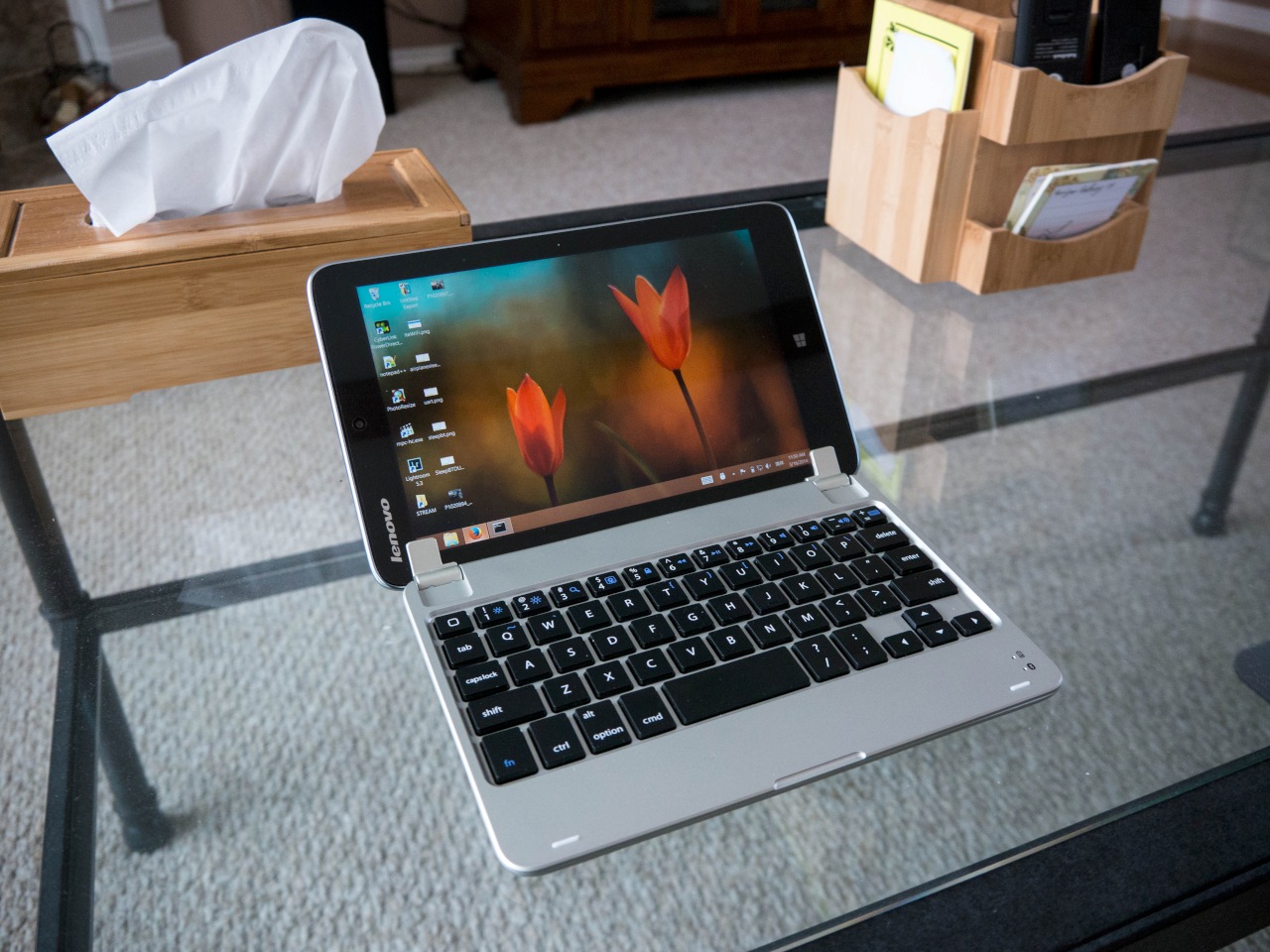 I have some EVGA USB-VGA adapters for many years now and used them with many computers, but none of them was able to play 1080p. So, when I saw totally smooth 1080p60 video with this above setup, my jaw dropped on my stomach! Then I checked CPU load, only 30%, I lost my conciousness and the last thing I remembered was my jaw on the floor. I was worried about the lack of HDMI port before I ordered this tablet, but I no longer miss it a single bit. Don't know who made such a magic, Bay Trail? Miix2? DisplayLink's new driver or Windows 8.1? And did I tell you the video was from a portable hard drive, then to the Miix, EVGA and the external monitor, all through a single USB port? 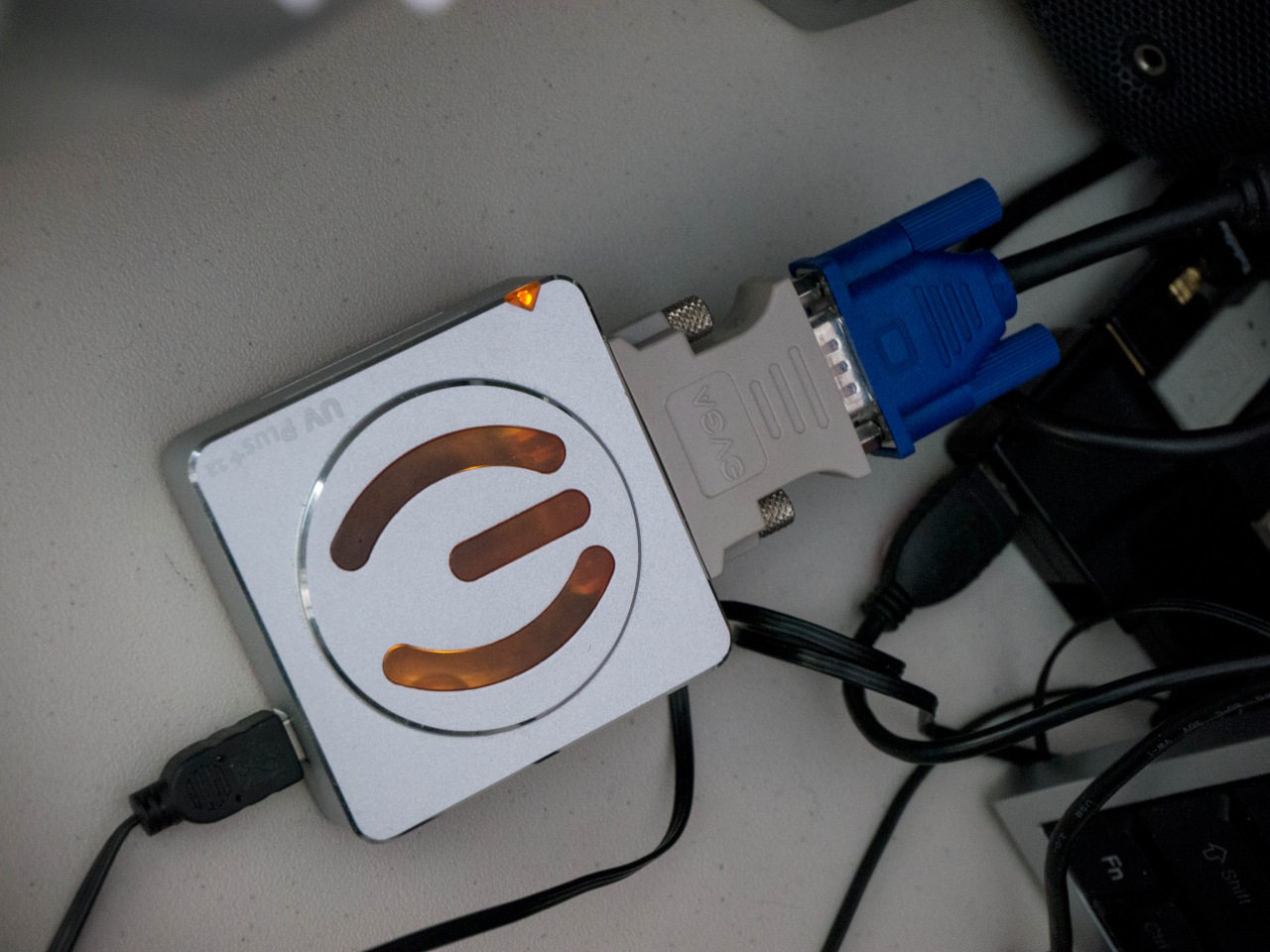 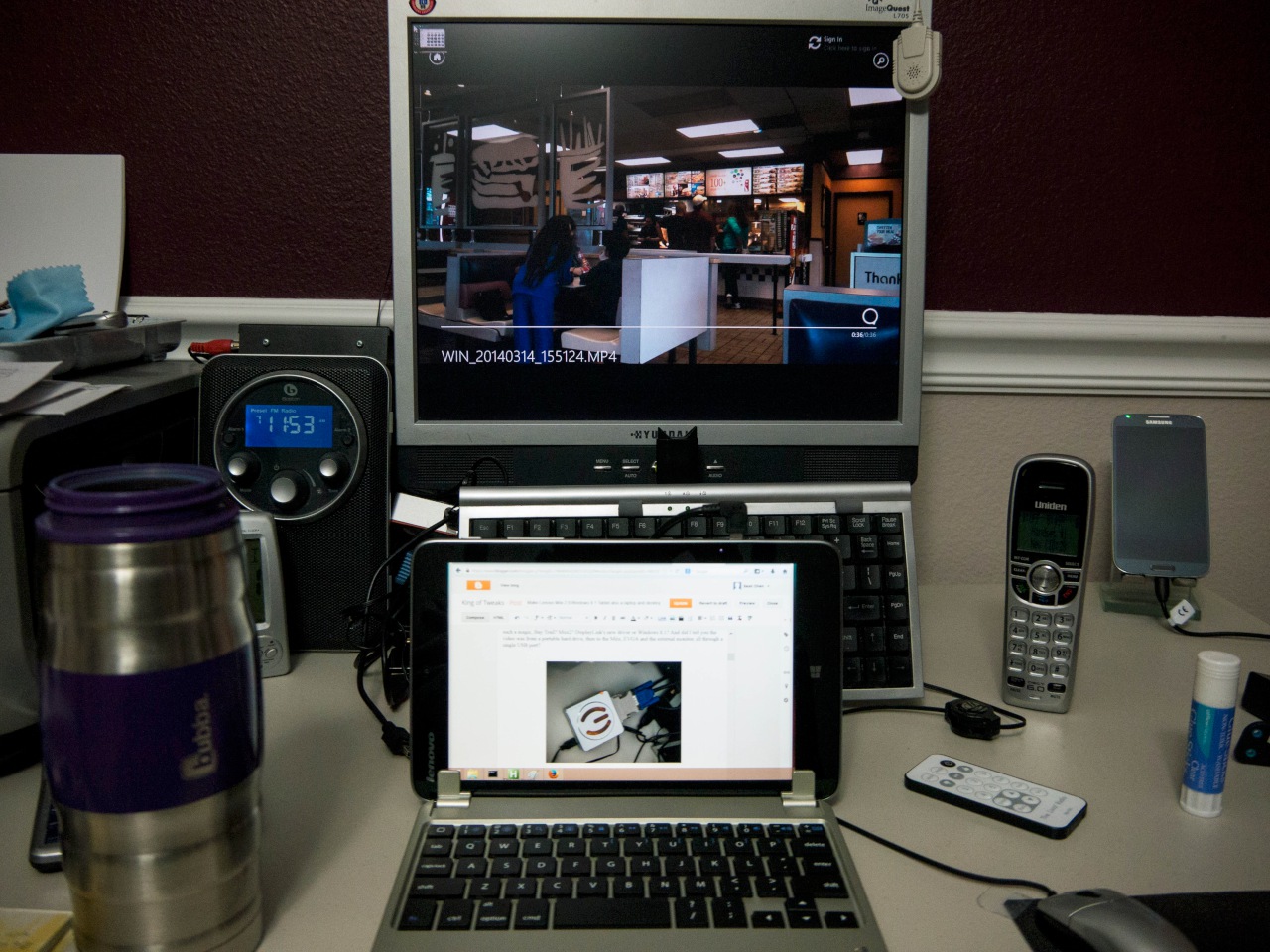 As long as you run legacy Windows applications, Windows 8.1's onscreen keyboard is uselessly hard to use. Miix 2 8 is currently the lightest and thinnest, almost identical to iPad Mini. Fortunately I found by accident a clap-on iPad Mini keyboard that fits the Miix ideally. The open angle is only 95 degrees or so, so I had to open it to do a very simple mod (more details to follow). All I did was to replace two notched washers with ordinary (non-notched) ones and now it can open up to almost totally flat (180 degrees). This keyboard has very good keys and battery last forever, but do turn it off to save Miix's battery (see Connected Standby below). 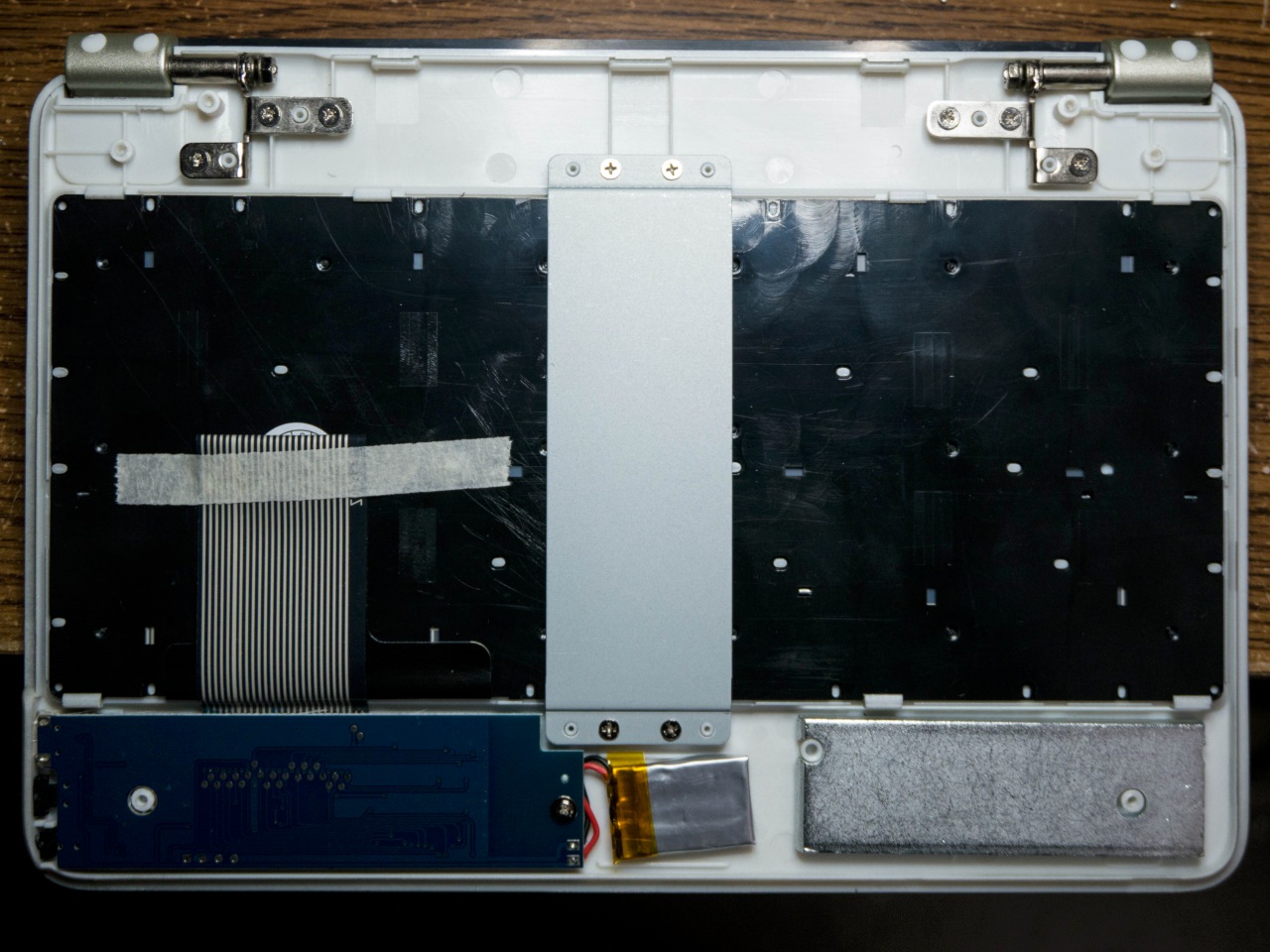 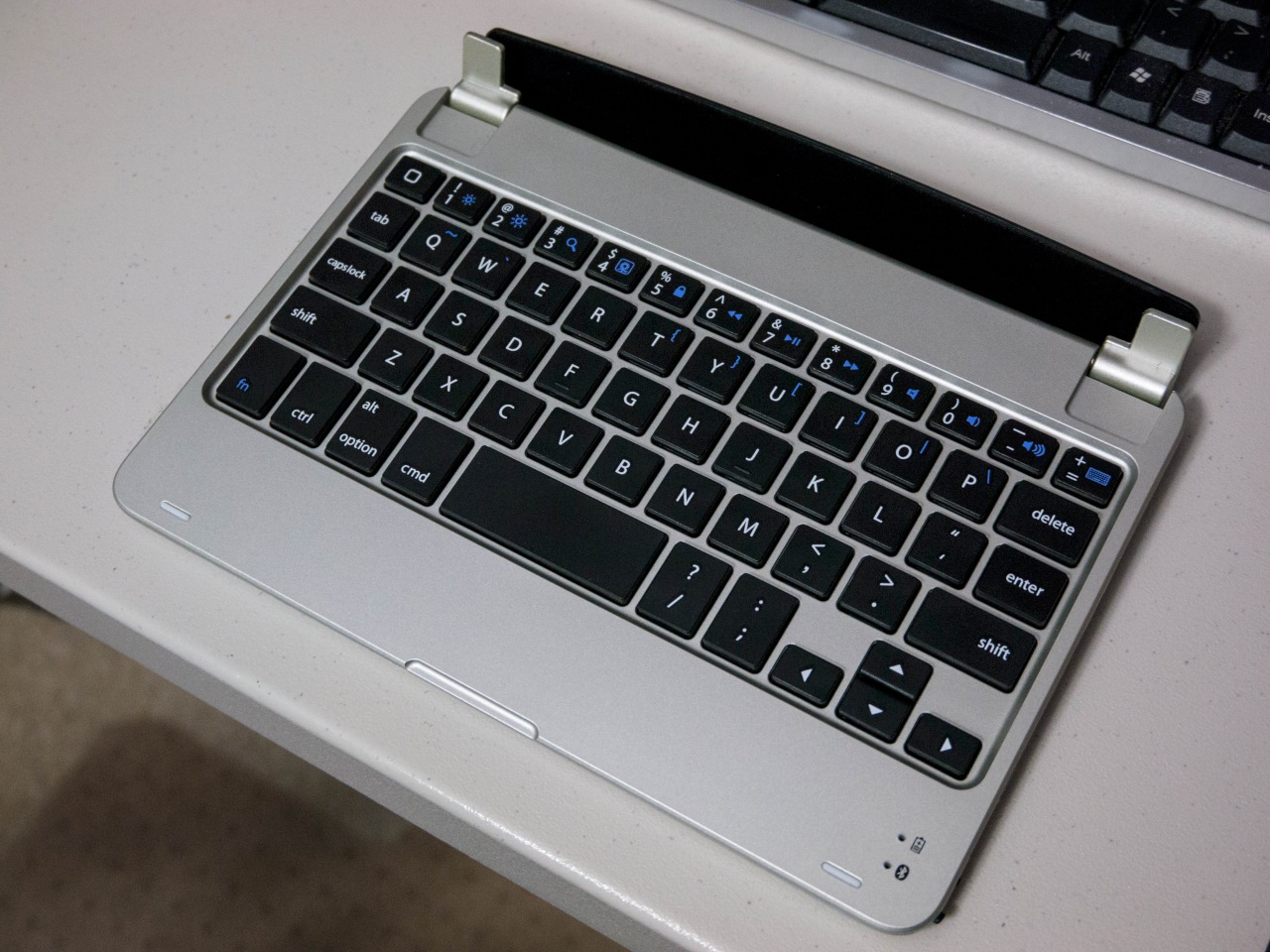 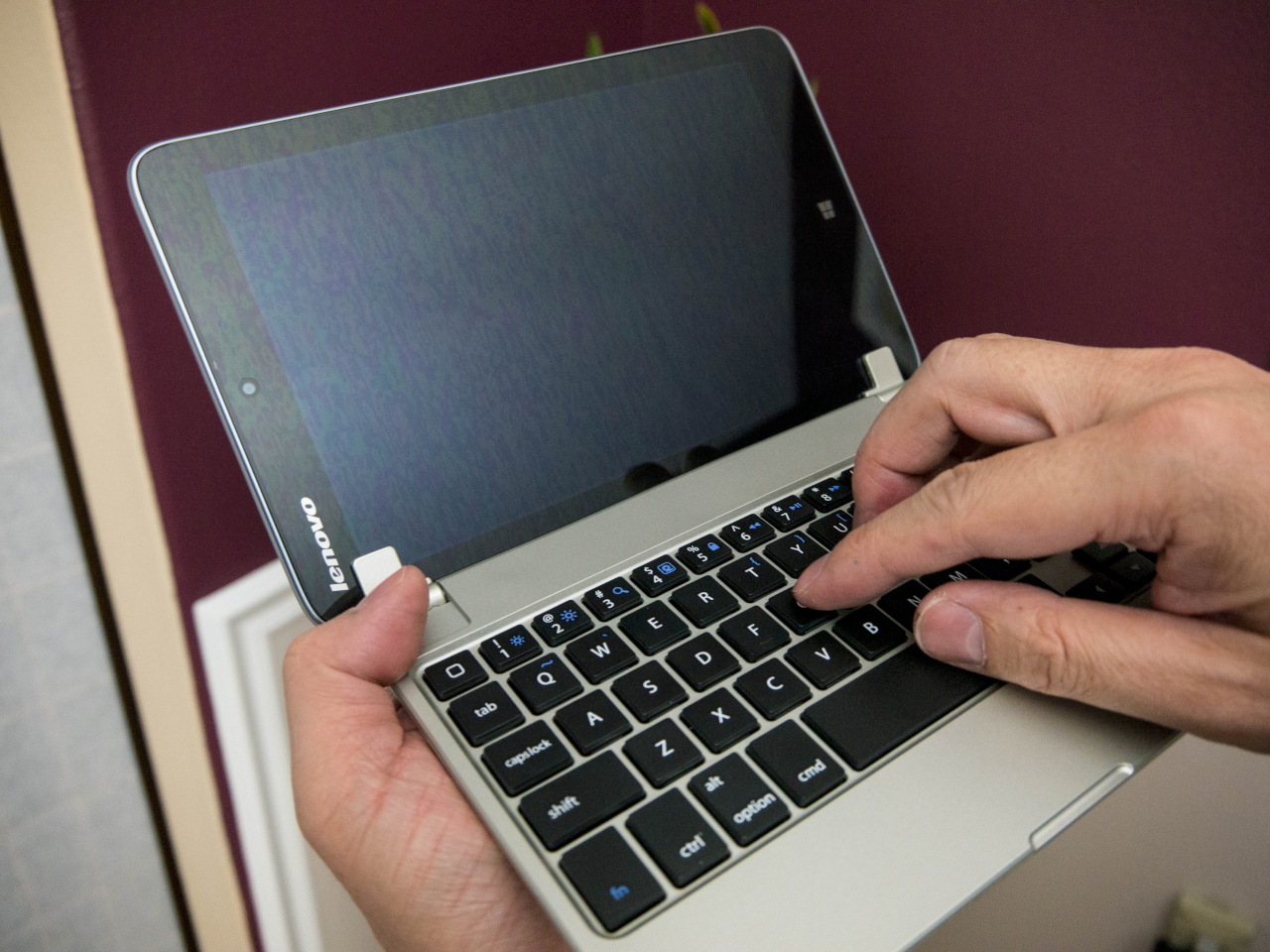 This keyboard does not have Esc and Del keys. I made an AHK script to remap the WWW-Home key (at the upper left corner) to Esc and remapped the capslock to Del with regedit (details to follow). I also remapped the search key to F3. BTW, the multimedia keys on this keyboard work, very handy for audio volume control.

The Windows "Start" button is blocked by the left clap of this keyboard, but this is not an issue at all. Even better actually, because the "cmd" (left to space bar) is the WIN key. There is also a soft WIN button on the right side of Miix.

More details on this keyboard.

Many Windows applications including the latest MS Office 2013 don't know what to do if they do not see a mouse, at least at some points. When I had the Acer W3 (the very first 8" Win8 tablet), I had to carry a mouse just in case. Now there is a fantastic utility, TouchMousePointer, it adds a touchpad on your screen, problem solved. See above video on how it works. 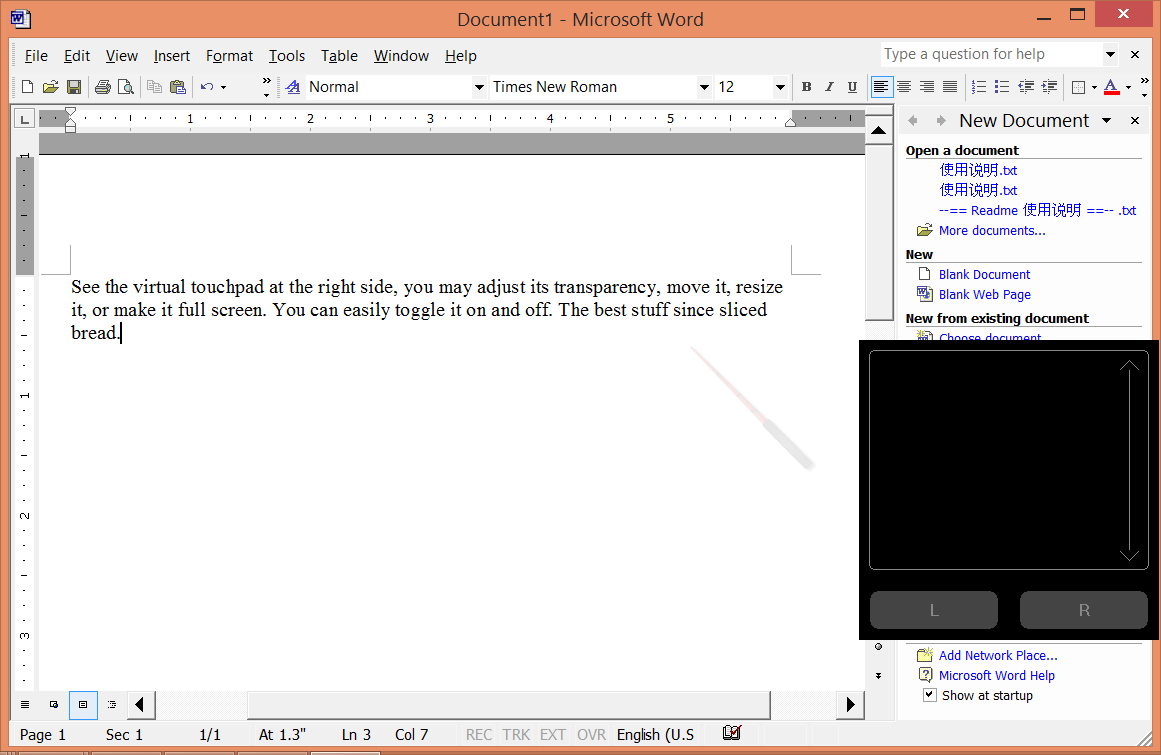 I also made a mouse emulator so I can conduct mouse functions on the keyboard (details to follow). 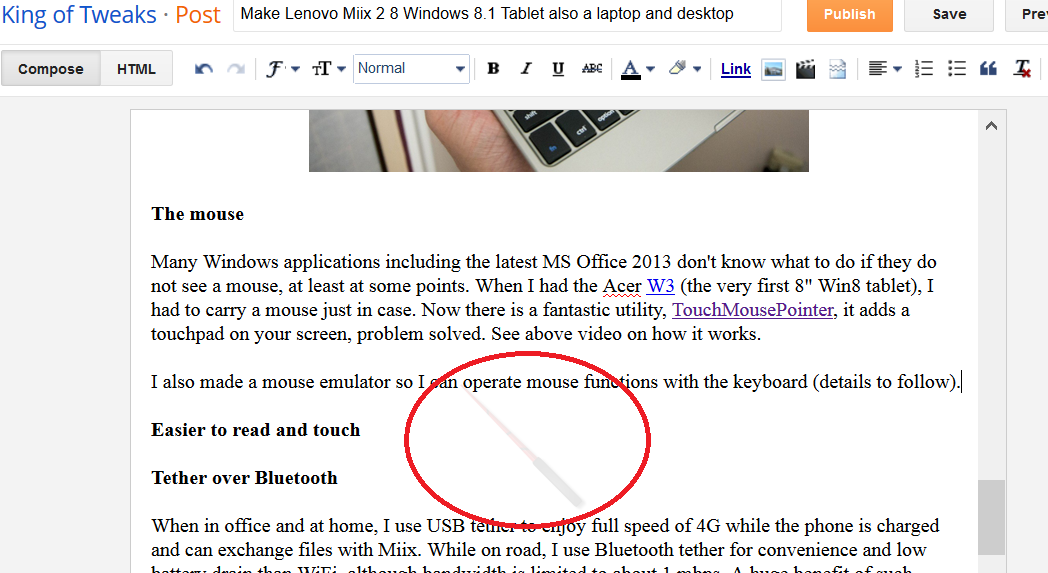 Make it easier to read and touch

The 8" screen is just about right to be productive while still pocketable. But the 1280x800 resolution is a little too high for fonts. So I scaled it up to 120 DPI (125%). I also made slide bars and other items wider with regedit for easier finger touch. 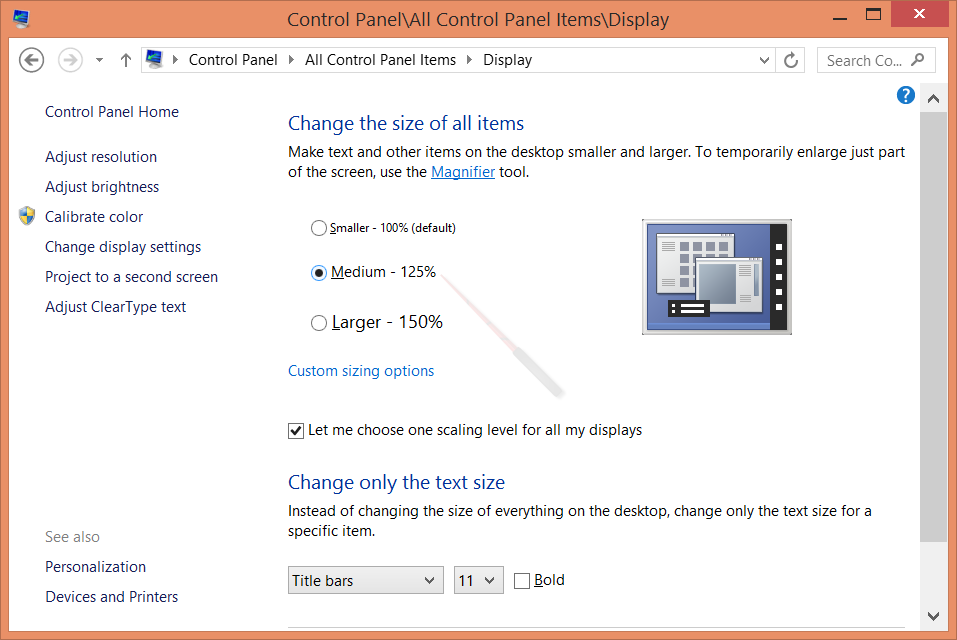 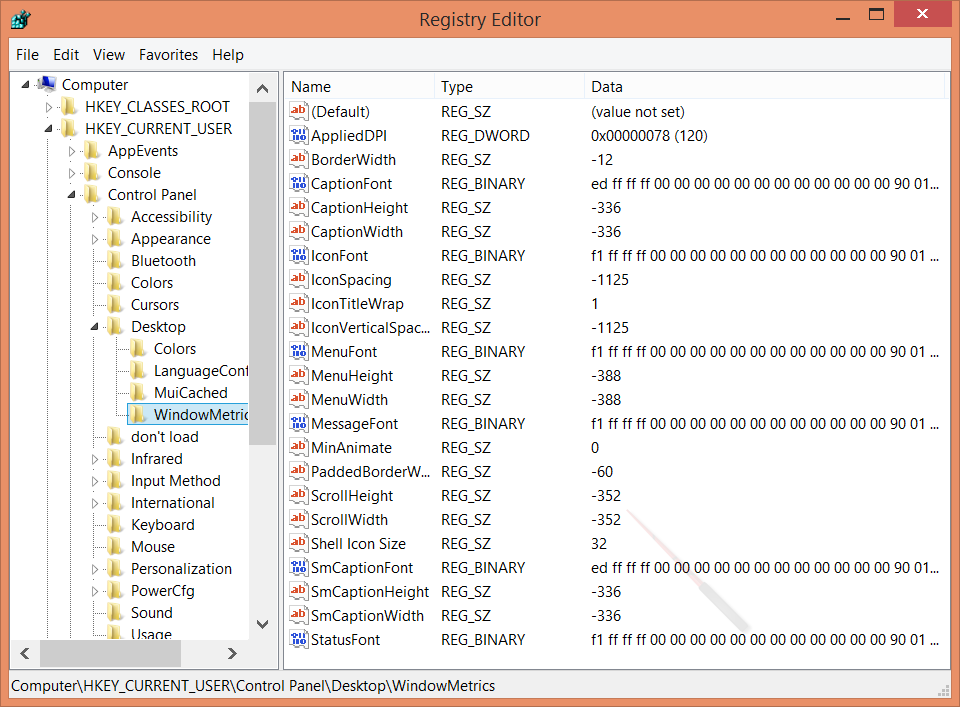 Such a powerful and pocketable computer would be pointless if not connected all the time. When in office and at home, I use USB tether to enjoy full speed of 4G while the phone is being charged by Miix and can exchange files with Miix. While on road, I use Bluetooth tether for convenience and low battery drain than WiFi, although bandwidth is limited to about 1 mbps. 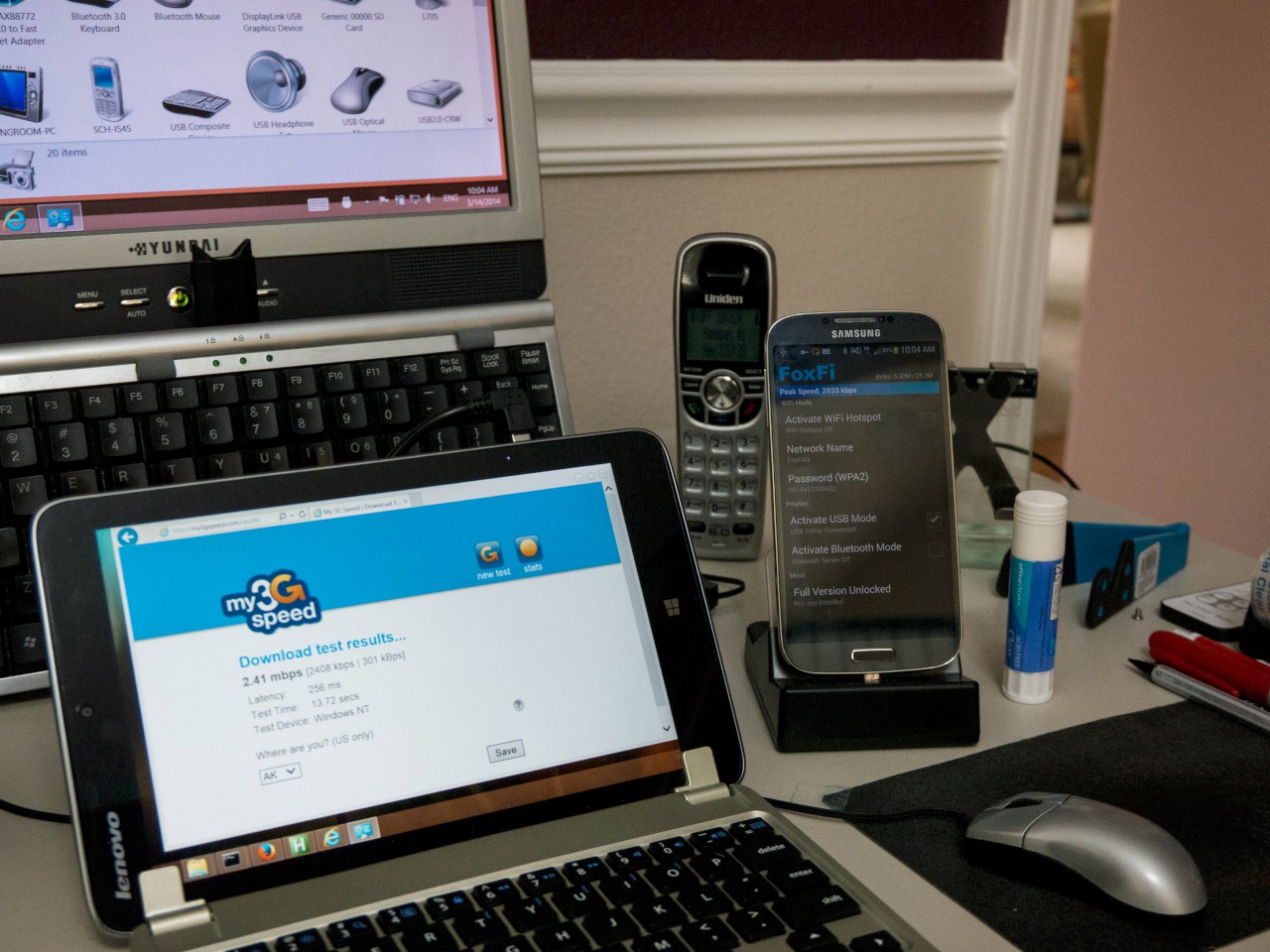 A huge benefit of such tethering over WiFi hotspot or Bluetooth PAN: it is totally transparent. I.e., if the phone is using proxy or VPN to get an unrestricted Internet access, Miix goes through them too - both the phone and Miix are on full Internet at the same time. I realized how important this is when I went to China last summer with my W3 and Note 2, where VPN must be used to climb over the Great Firewall. With WiFi hotspot and BT PAN, I had to close proxy and VPN on the phone and ran them on the W3 instead, and the phone itself then no longer had Internet, quite hassle back and forth.

With BlueDUN, uploading speed is very low and latency is very high, but you don't need to install anything on Miix - just use Windows' built in DUN as showing in above video. With FoxFi, you have to install PDANet on Miix, but latency and speed are good especially via USB.

Because both Miix and Galaxy S4 support BT 4.0, power consumption is extremely low. I can leave PDAnet on Miix connected all the time and it drains virtually nothing, only about 2% overnight. See "Connected Standby" below. The coverage is great too, I can leave the phone downstairs and tether to it from upstairs. My audio BT devices never worked this far. 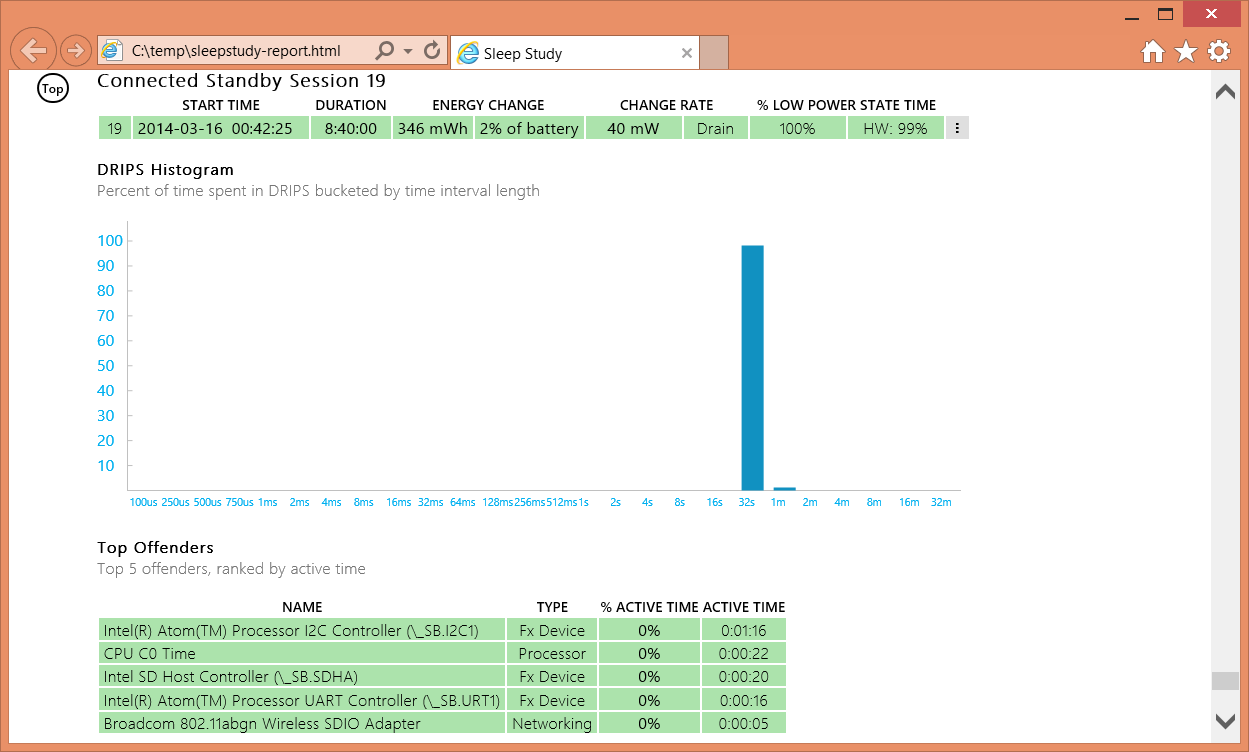 This is a great feature of Windows 8 and Intel's new processors. When it works, Miix can idle for 30 days! However, it is very fragile, a bad driver can easily break it and result into very heavy battery drain during idle. To see if any offending driver, open a CMD window as an admnistrator and run: powercfig /sleepstudy:

Then in the same folder, open the generated sleepstudy-report.html. If everything is fine, the last session will be all green, like this: 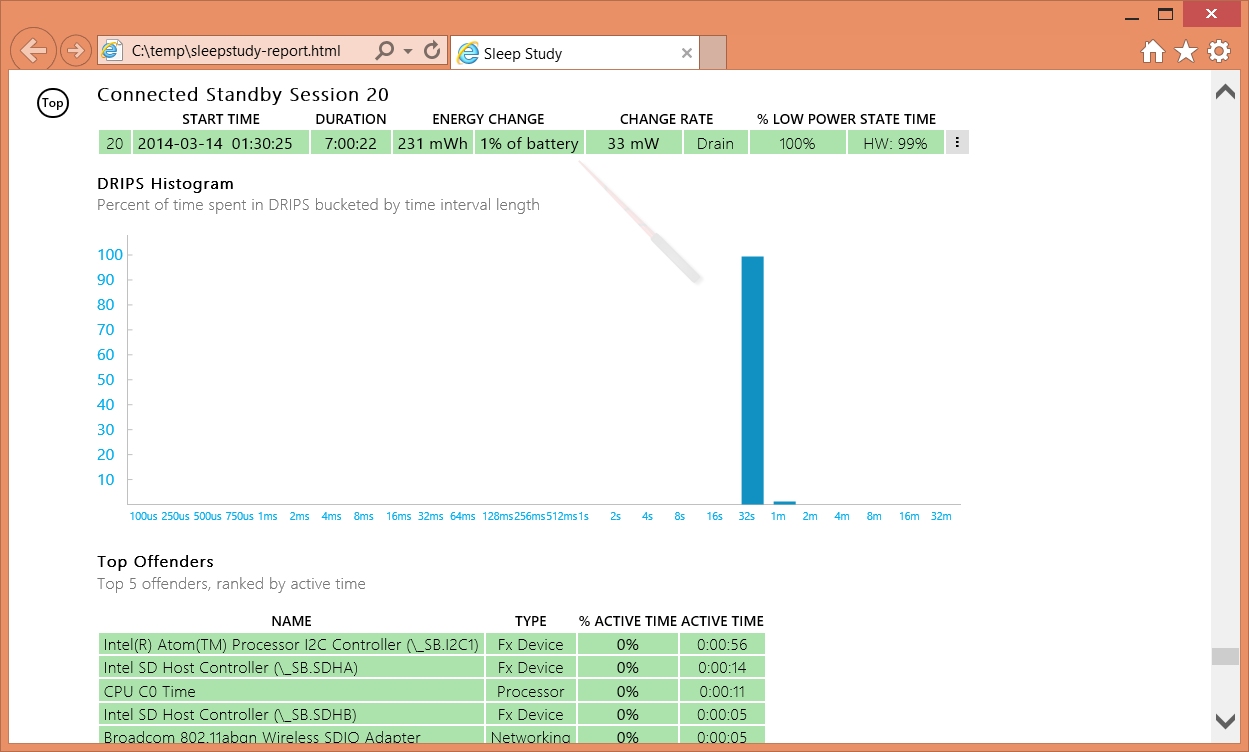 Otherwise, the top 5 offenders will be listed as red, so you know who you need to fix. For example, if I forgot to turn off the Bluetooth keyboard, the UART driver will keep Miix active and drain about 2% battery per hour: 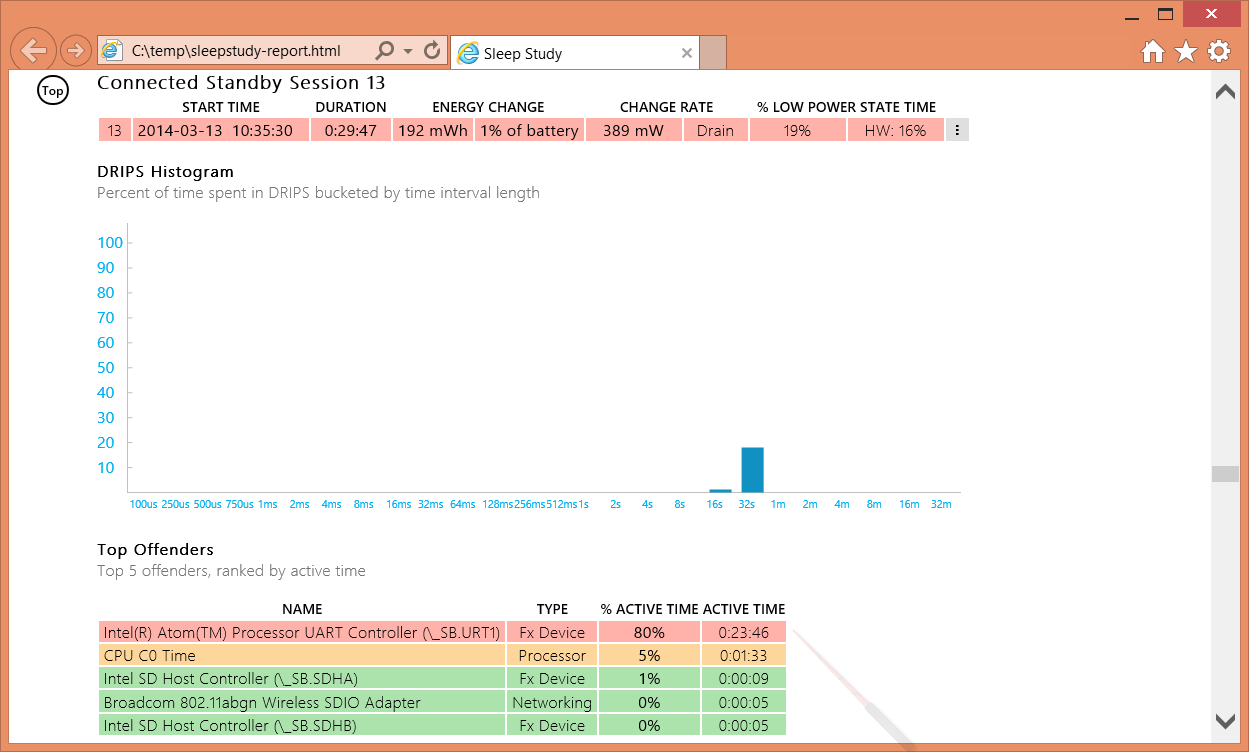 The Bluetooth driver downloaded from Lenovo disconnects the BT keyboard after 10 minutes or so, then I have to turn BT off and on to get it connected again. Very annoying. To resolve this issue, I had to manually check Windows updates (I never enable auto update for anything) and only install the "Broadcom serial BUS Driver over UART Bus Enumerator" driver. Don't let Windows automatically install other drivers, because there are bad ones among them and I ended up with a fresh re-installation of Win8.1 (twice actually).

Furthermore, I uninstalled those live (push) metro apps, including email, people, calender, skype, weather, stock, food, travel, etc. Now my Miix's battery drain is less than 1% per hour with WiFi and BT on, or less than 1% overnight in airplane mode or 2% with just BT on.

Finally, I have the one computer for all. On the road, in the office and at home, for web search, entertainment, daily routines (such as Quickbooks) and serious jobs (such as video editing with PowerDirector and RAW converting with Lightroom). It can be charged and docked via a single USB, very convenient. It can have a real keyboard like a true laptop and can still slide into a jacket and pants pocket, truly portable, unlike 10" that's only transportable. A single plug-in turns it into a full desktop computer, very productive. See, I can write this blog while watching online TV or type an email message while sitting in sofa: 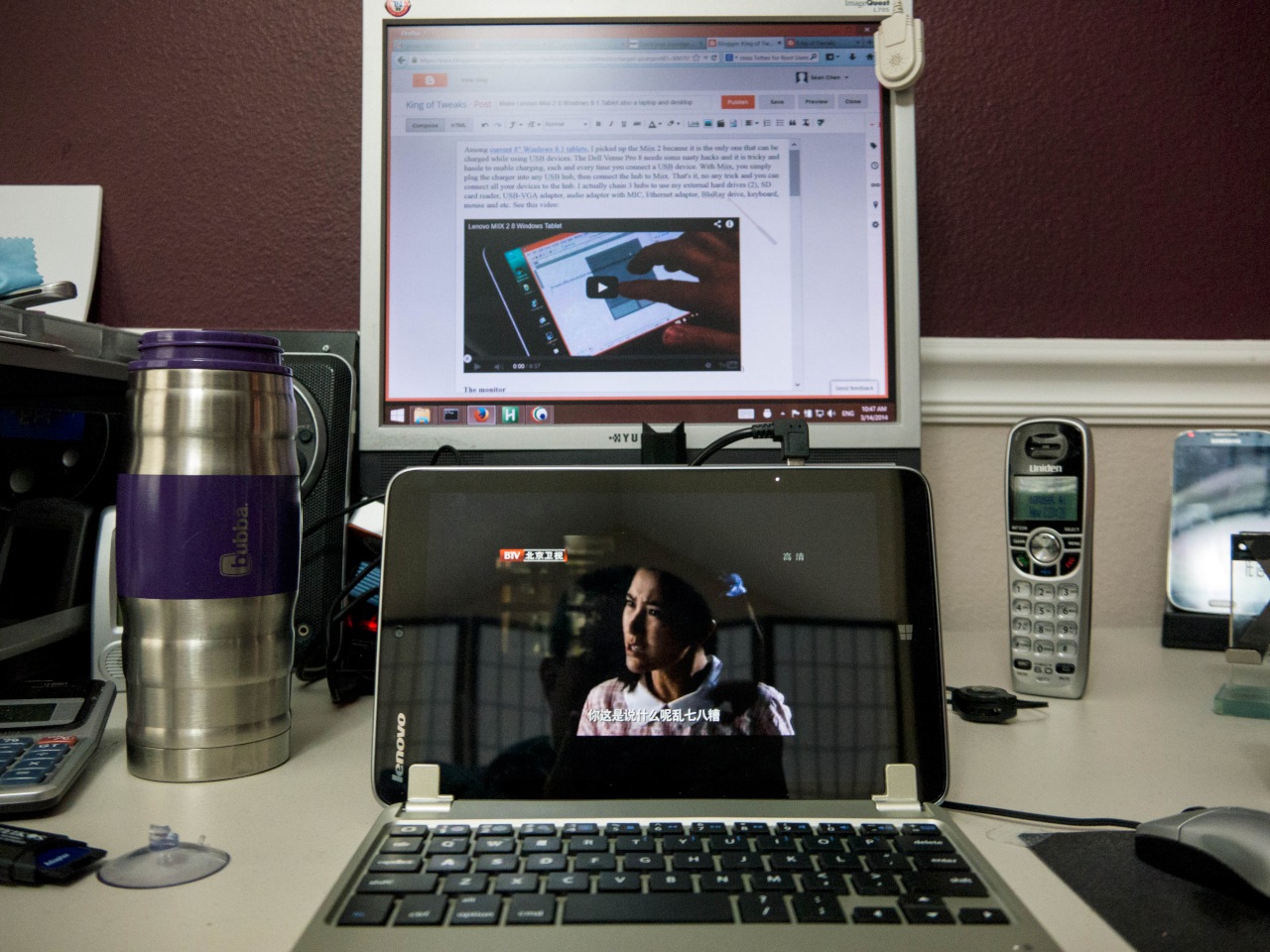 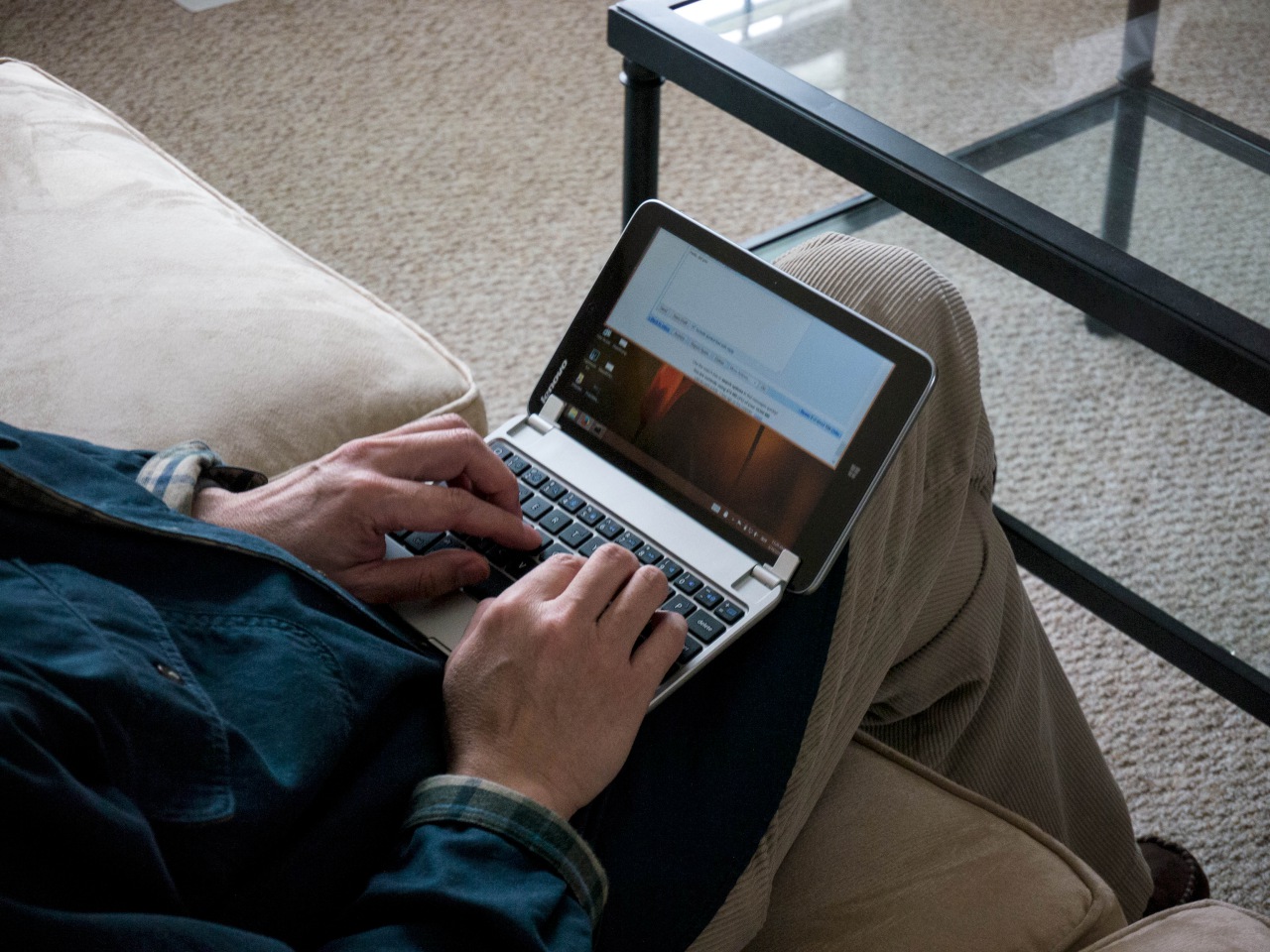 Mobile computing is no longer about just travel, it also means at the desk, in sofa and on toilet. The Surface Pro is expensive bulky crap, you cannot use its keyboard, say, in sofa like above.

I don't know why WinTel sell such a powerful and versatile computer for so little money. They beg Apple for a share while they have a golden rice bowl in their hands. I got mine from Amazon for only $250, yes, it is 64GB. Actually I know why: they don't have a guy like me or Steve Jobs to do above tweaks. What a pity.

There are too many more details to be covered into this single article, so stay tuned.

Some photos and video taken with Miix

All directly out of Miix and inserted right into this blog which is written on the Miix, mostly on a bus or while walking around under the Spring sun. 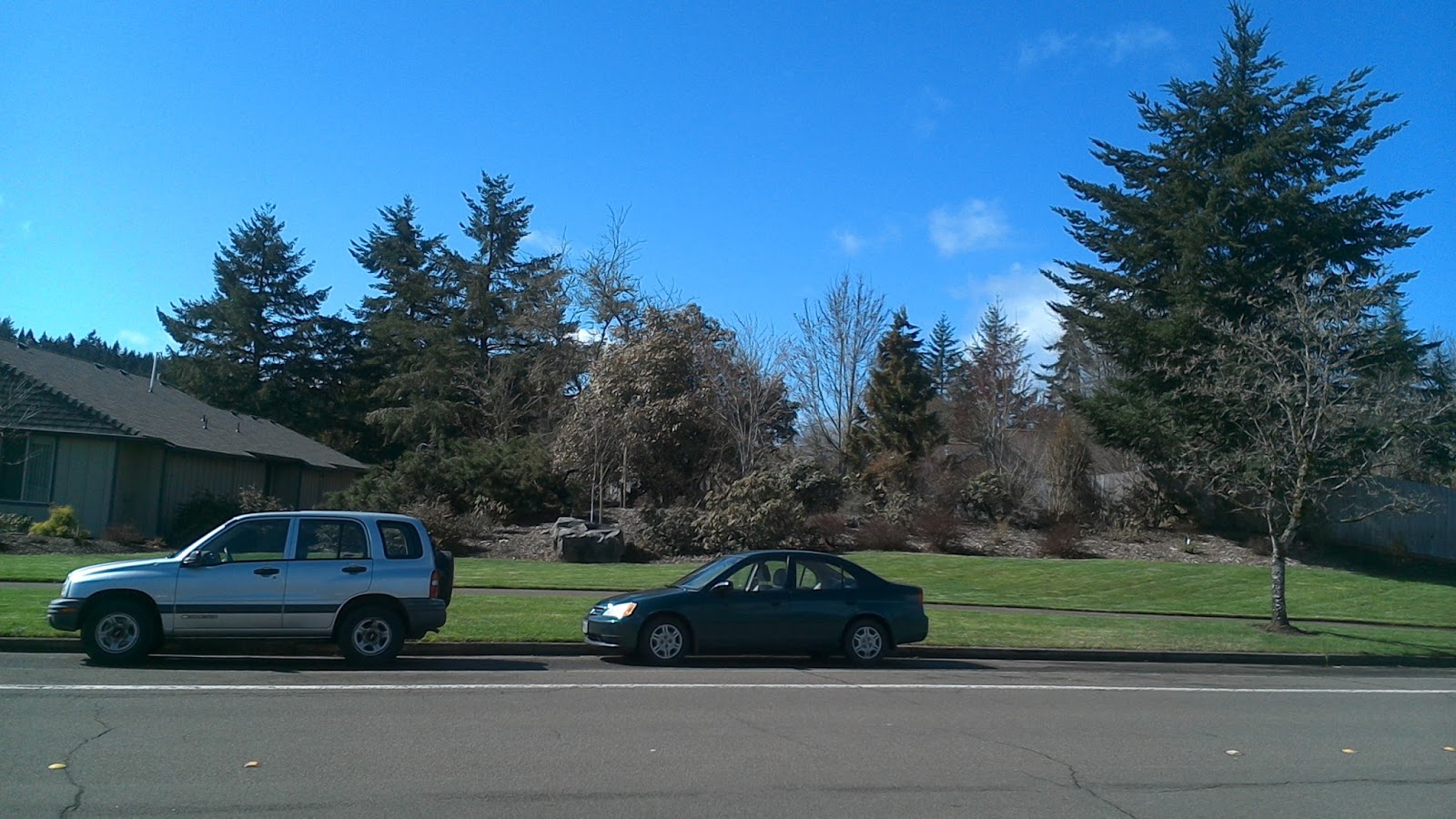 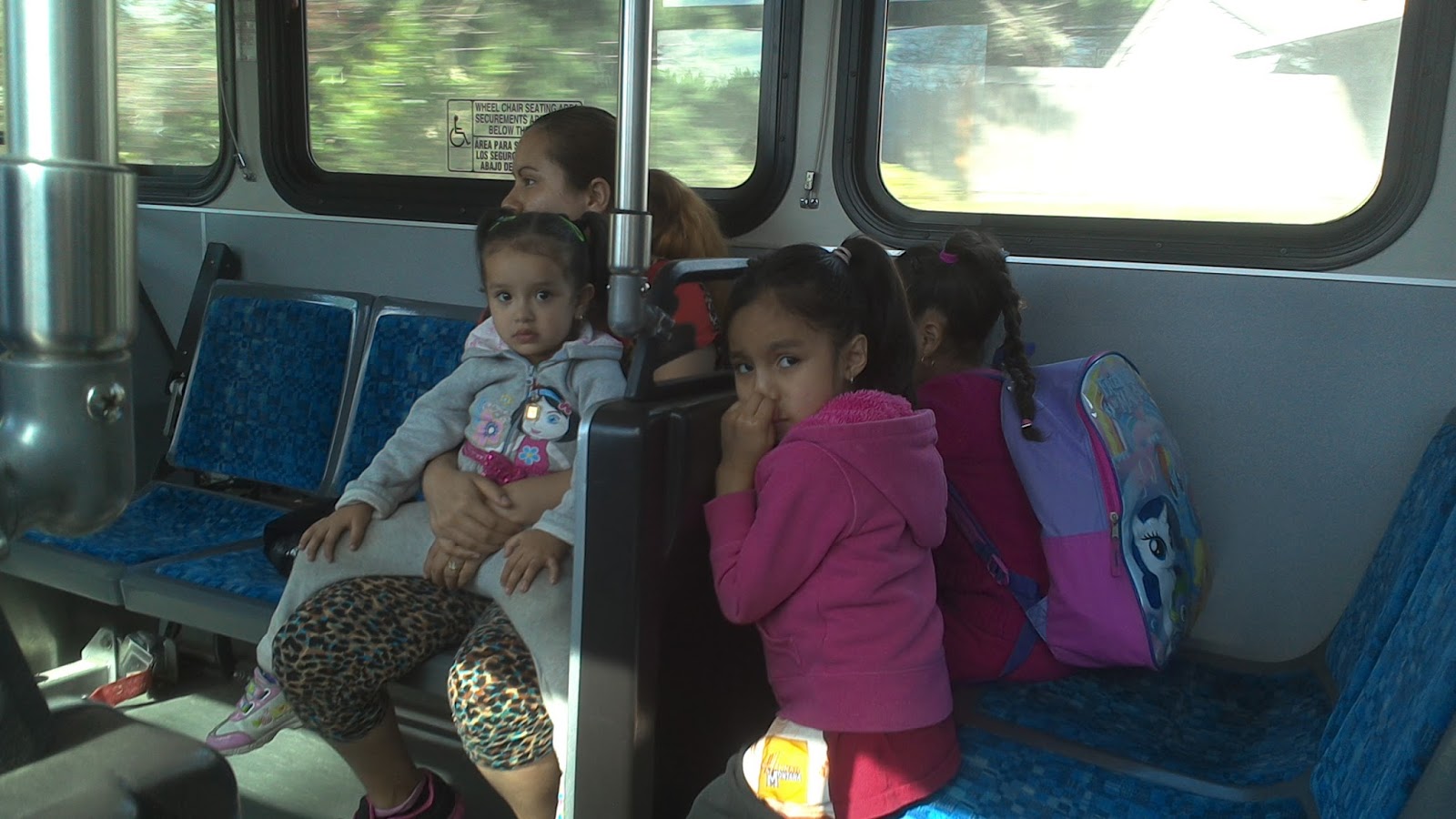 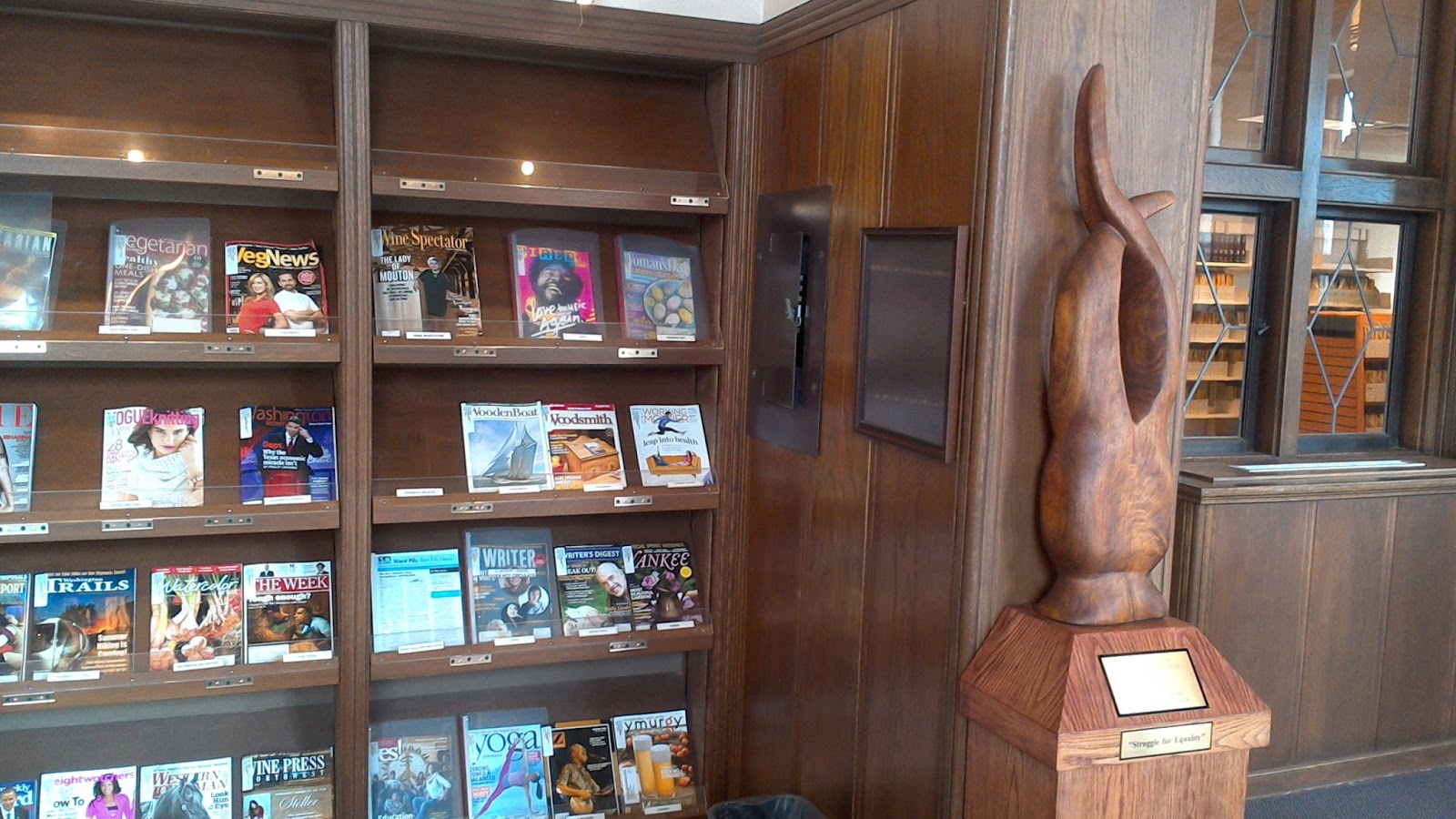 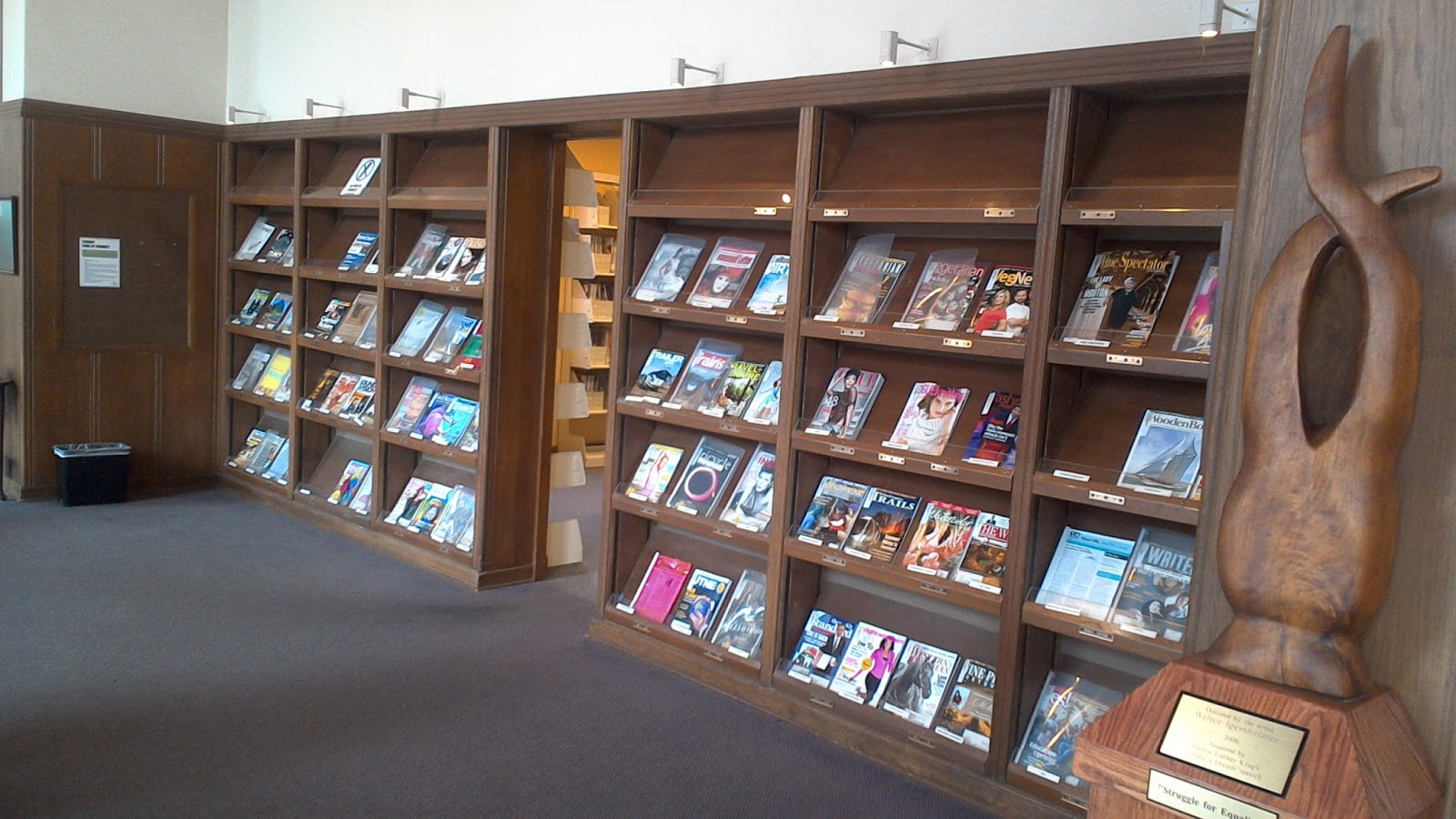 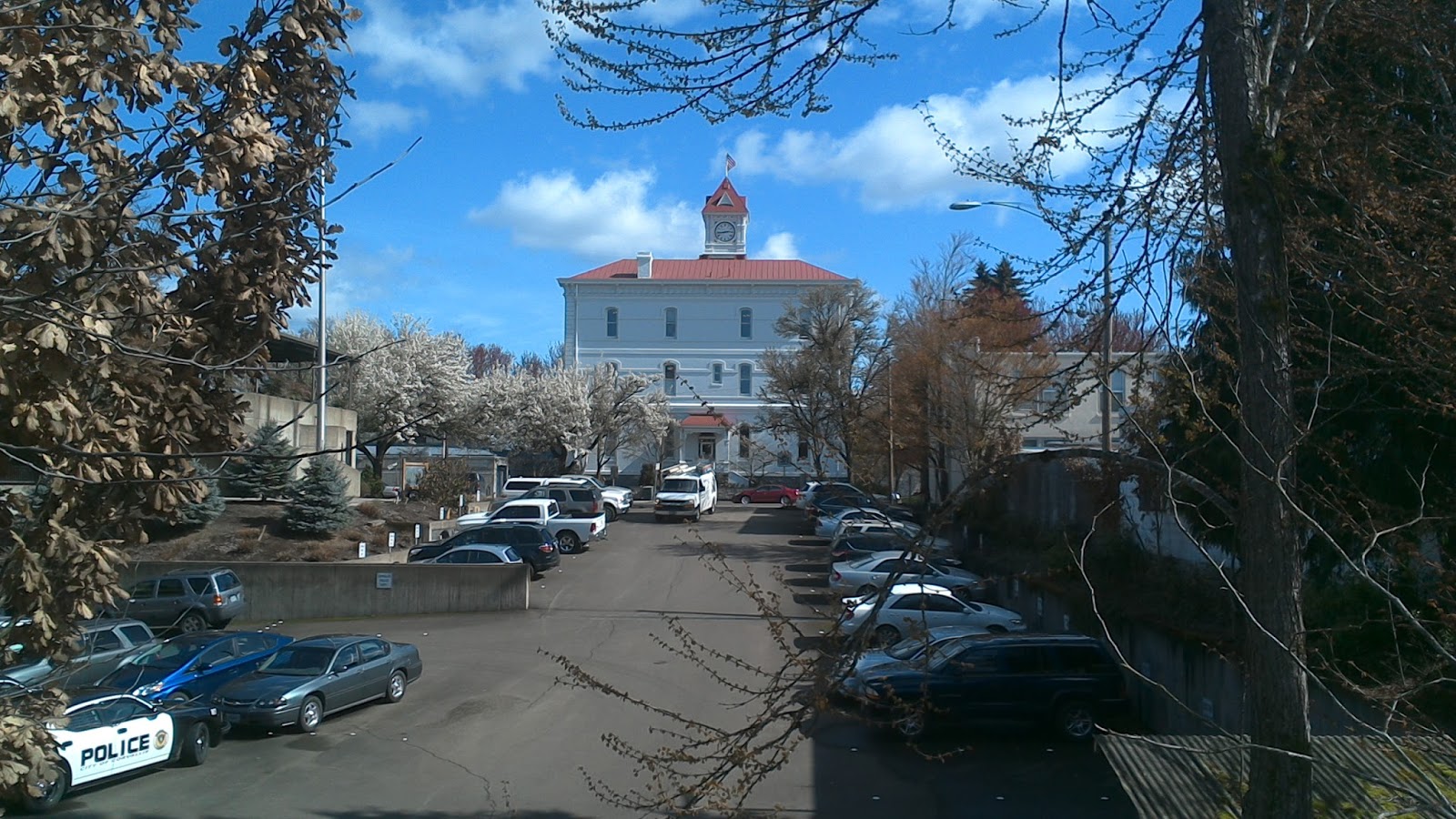 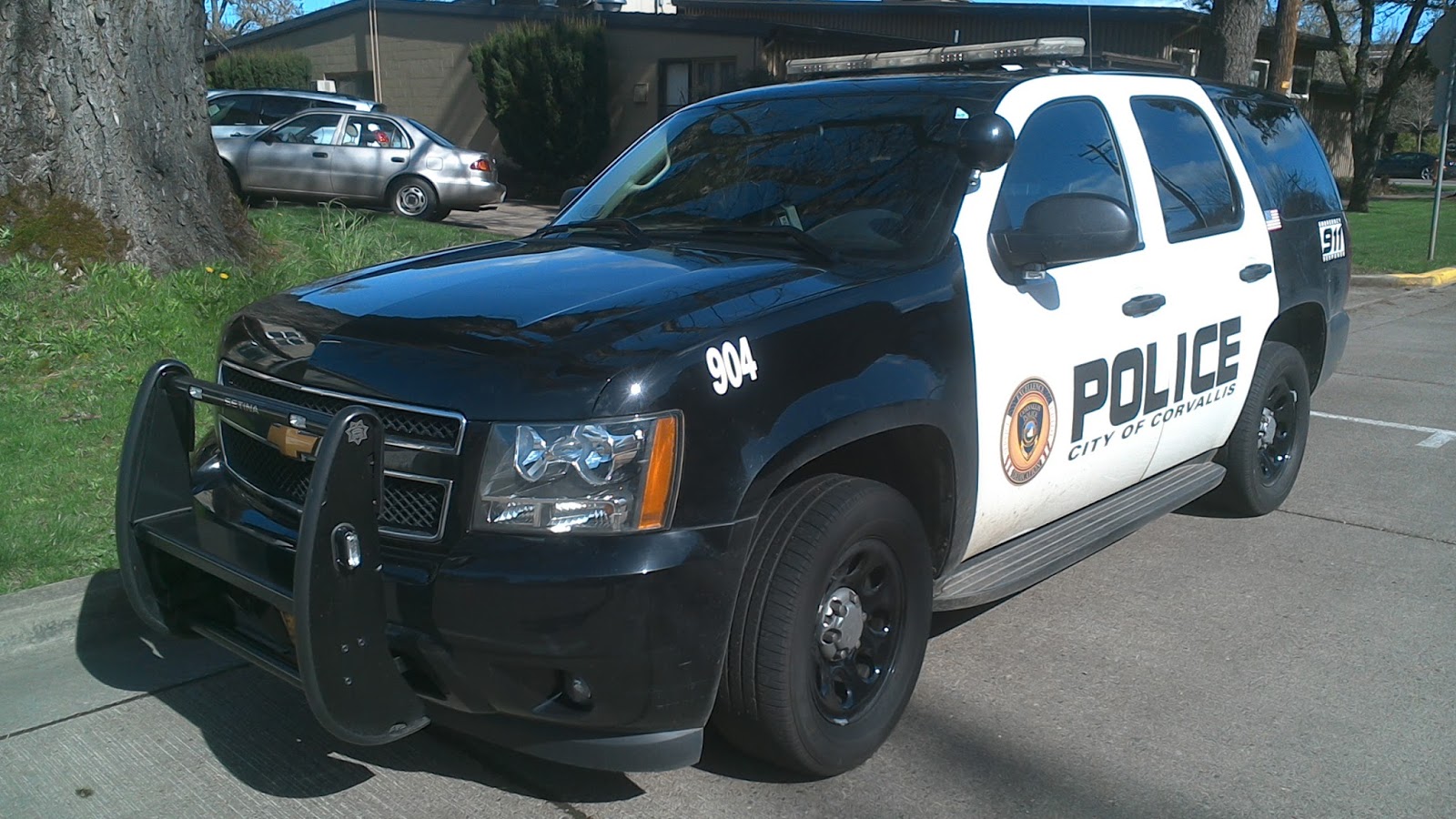 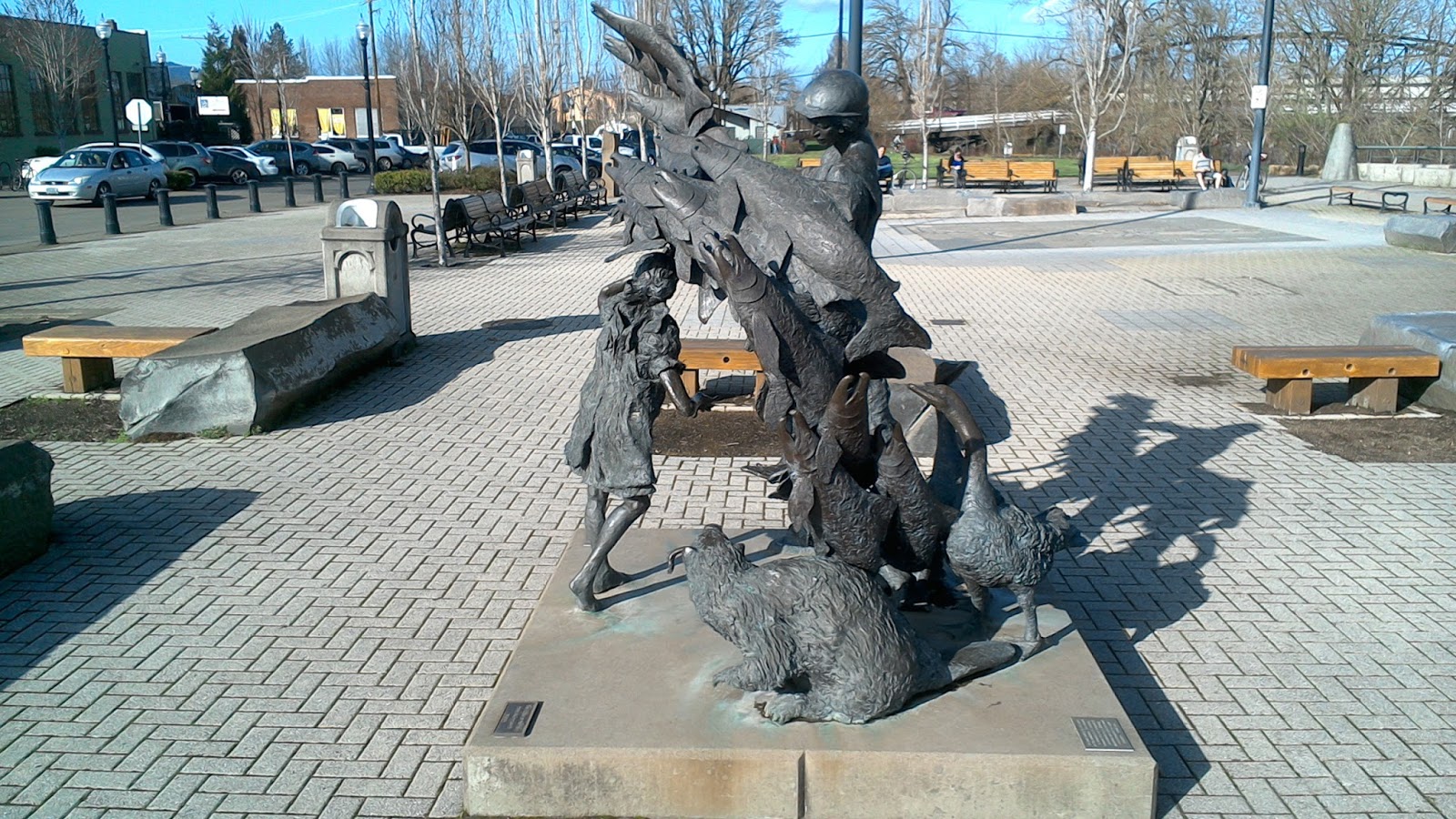 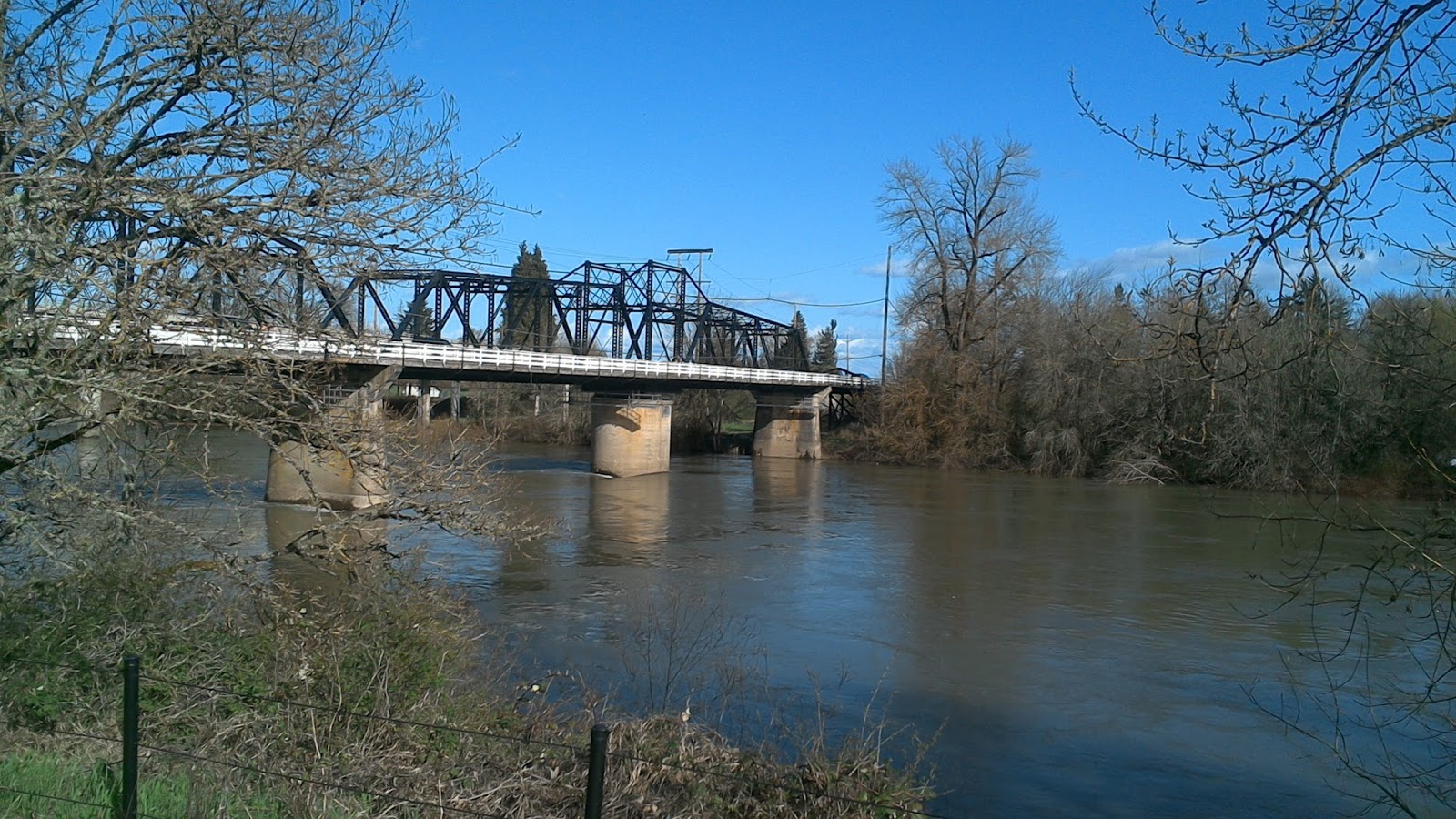 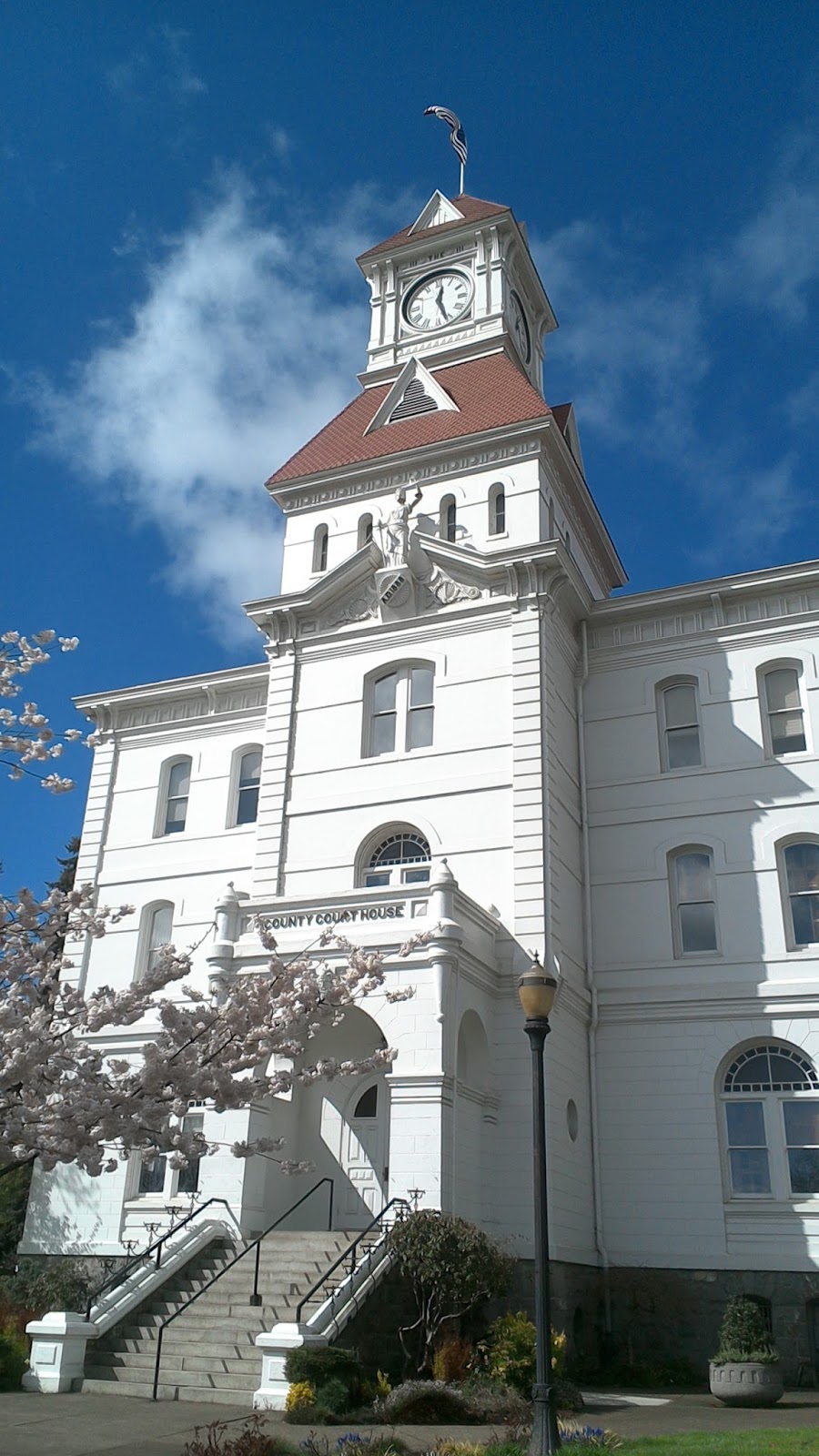 You may download the raw video clips here and here.